Have a pdf document on their web site with
Whats New in Revit Structure 2010
Posted by cadalot at 12:49 No comments:

William Sutherland apologies "to anyone coming across his page from a search engine link hoping for nicely arranged Revit tips ;-) the rate of acquisition of Revit tips makes it more of a scribbling pad..." but what a great resource with personal insight of what can and does go wrong. Click Here to visit

Feeling just a little frustrated that I had only just purchased the book Mastering Revit 2009 and that they are going to change the whole darn User Interface for the Ribbon that I hate in Word 2007, I posted the Ribbon! We Don't Want Your Stinkin' Ribbon on my blog and on the AUGI forum.

Wes Macaulay posted the reply on the AUGI forum below:-

“The Ribbon is an intelligent response to feature bloat. I would encourage everyone who is opposed to the Ribbon to look at the Microsoft video on why the Ribbon was developed.

I think the Ribbon is a good idea, but it has to be implemented right. Evidently Acad 2010's ribbon is better than 2009's so even the Ribbon we get in Revit 2010 could be improved upon.

The Ribbon isn't marketing balderdash at all -- you have no idea about the thought that went into it. But should they have finished the site tools in this release instead of the Ribbon? Maybe... or maybe getting the Ribbon needed to happen now, because at some point, Windoze users are going to have to come to terms with the Ribbon. I didn't like it either, but the video in the link above made me see why they're doing it. And the Factory might as well get us accustomed to the new era of UI design sooner rather than later.”

I downloaded and watched the video as he suggested.I can see what he means about the amount of thought that went into it......

In Word It just makes me feel like I've lost control, and I really don't want that again, just as I'm finding my feet with Revit.

I was one of the first to jump from DOS to Windows, and that did not feel as awkward as the move from menus to ribbon!

Perhaps it's just my age catching up with me?

But if you feel the same about the Ribbon then it is well worth watching the video as Wes suggests, just to find out why they have done what they have done, like it or not! 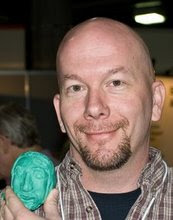 David is a Structural Designer based in Tampa Florida United States a Revit Structure power user With very deep knowledge and many years of experience in AutoCAD, Dave has also been an AUGI Top DAUG, AUGI President, AUGI writer and he is one of the Authors of Mastering Revit Structure 2009

His Blog is always an initeresting read, and worth keeping an eye on.
Posted by cadalot at 08:00 No comments:

The article is about Autodesk’s two webcasts to officially launch the next version of its design software portfolio, one focused on AutoCAD and the other on its building, transportation, and geospatial products.

“With version 2010, Revit sports a slightly different look and feel in contrast to the interface the application has had since it was introduced, so existing users will have to go through an adjustment period to get used to it. Instead of the toolbar on the left, Revit now sports the ribbon-based tabbed UI running at the top of the application window that Microsoft has popularized with its Office 2007 applications (see Figure 4).”

The question has to be WHY?

Why not more content and less cosmetic crap that make you feel like your getting more for your money or subscription. There are lots of add ons for those on subscription and who in there right mind would buy Revit without subscription? It’s the only way of getting what should be a full package anyway.

For too long software companies have got away with, “we will fix that in the next release” or "please download the latest service patch” to fix the buggy software we have just sold you.

It’s got to be said, I used Microsoft Word from the start, and recently I had a new computer with Office 2007 and I hate the bloody Ribbon.

Why move everything around from where I knew where it was, my productivity dropped considerably whilst I looked for the new locations of known features.

There are now software companies offering bolt ons to Word 2007 to replace the known interface. In AutoCAD 2009 they at least provided a Classic AutoCAD radio button to get rid of the Ribbon.

Can anyone please confirm that they have done the same in Revit Structure and Architecture 2010?

From one of the 2010 brochures

You can smell the marketing bull**** from here.
Posted by cadalot at 20:30 No comments:

New Kid on the Block

The Revit Kid! AKA Jeff Pinheiro has created a Blog and Facebook site and hopes his Blog becomes a major source of information for students using Autodesk Revit, he says:-

"Ultimately, I plan for this blog to be a source of information for the student using Revit in the classroom at a design studio level. I would also like to open it up to the readers to ask me questions to further stimulate the information being produced. By a student, for students..."
Posted by cadalot at 14:53 No comments:

Revit Structure - Wishlist
Got a wish? Blow out the candle here!

A Hyperlinked list to all the AUGI forum areas can now be found on the left panel of this web site.
Posted by cadalot at 08:00 No comments:

Cadalot Web Site is moving over to Blogs

I was hoping that normal service was going to be resumed to my web site.

I moved over the UK Revit Register and then thought why not move the whole web site over to Blogs?

My cadalot web site has been around since 2000 and has been Tenlinks Top Ten Listed since 2001. There was a lot of information on it, and I’m in the process of porting the web site over to the family of Blogs that you may have noticed I have created and has appeared on the top left of the screen.

This is a bit like a spring clean, and it is giving me the opportunity to check links and content and update the information.

My cadalot.co.uk domain name now points to a Cadalot Index Blog which is like the old index page of the web site and give people access to the various areas of the old web site but now provided on Blogs!.
Posted by cadalot at 21:20 No comments:

It would appear that that my virtual hosting providers are having a few problems at the moment.
I’m hoping that normal service may be resumed as soon as possible but who knows? I’m still waiting for answers to emails as they appear to busy to answer my questions over the phone.

In the mean time, I’m looking at alternative ways of providing some of the cadalot web site information, so that UK Revit Register is now on it’s own blog rather than being provided on the web site.
Posted by cadalot at 06:24 No comments: