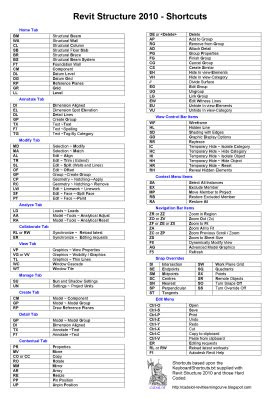 There are many predefined keyboard shortcuts for Revit Structure 2010 commands.
This lists the shortcuts by Ribbon Item
.
I have printed out two copies, placed them back to back, then encapsulated them in plastic using a laminating machine to keep nearby as a Quick Reference Card.
.
This is version 2 of the 2010 Shorcuts Quick Reference
Posted by cadalot at 19:18 No comments:


The Group provides UK Revit Users with a Discussion Area or Forum, post News Items and the facility to advertise Jobs directly to Revit Users or Companies that use Revit.

You can subscribe to a weekly or daily email re activity on the group, or follow a discussion. 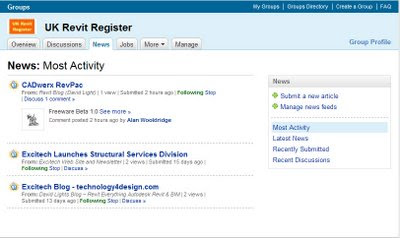 This resource will only be as good as the membership makes it......... 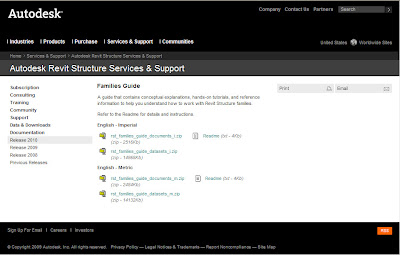 A guide that contains conceptual explanations, hands-on tutorials, and reference information to help you understand how to work with Revit Structure families.

Refer to the Readme for details and instructions.

Getting Started with Revit Structure 2010

After what feels like and is months of waiting, Revit 2010 is here. The company I work for have finally installed Revit 2010 on the network and booked formal training, and I've bought a new PC for home that will run Revit.

After being set up with rights to the subscription centre, I harvested all the software and supporting material so our IT guy could install on the network as we have purchased four licences.

Not naming anyone but, the companies chosen reseller sent 2009 boxes and we are still awaiting a boxed set of software for 2010 from them. In the mean time I have spoken to one of the older more established UK resellers who have very kindly sent me a 2010 trial box to my home address. 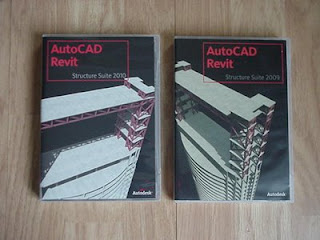 From the outside there is not a lot of difference between 2009 and 2010 the difference is what’s inside the box….. 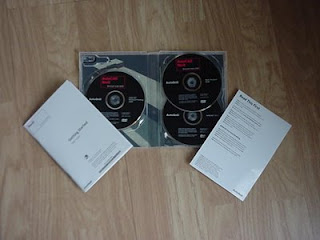 In the 2009 Trial there is an A5 Read This First sheet and a Getting Started Manual that has a Steel Project reading from one end, turn the book over and upside down and you have a Concrete Project the other end of the book.

It was this book that I was after. Historically its’ always been available to download from the Autodesk web site (historical version are still there), But this time I could not find it on the web site for 2010. 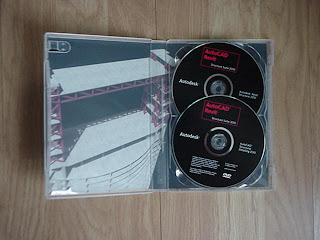 When I opened up the 2010 box and looked inside there are now only two disks not three, as AutoCAD and Structural Detailing now being provided on a single disk but there was nothing else!

I telephone the reseller who had sent me the disk and asked had they forgotten to include the little manual and Read This First sheet, or had someone removed it before dispatch because this box is 20mm wide and has the grips to hold the missing manual.

After a little investigation they come back to me and informed me that as a cost reduction exercise Autodesk were no longer shipping the getting started manual with the trial disk!

Thinking that perhaps this individual was incorrect or misinformed, I contacted another UK reseller who has verified that it is no longer provided.

OK think I, it has to be on the CD, they are saving paper, trees and the environment and it will be in adobe format on the disk……nope not even the user manual appears to be there all you find are these:- 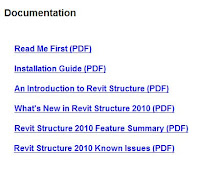 Autodesk, if you’re reading this, and I know you do visit the blog from time to time then this is a real backward step if you want people to have a go at flying Revit Structure, how on earth do you expect them to have a meaningful trial of the product by not including the little manual…. You are doing yourself no favours and Revit Structure and injustice.
Posted by cadalot at 07:44 No comments:

Excitech is pleased to announce the formation of its new Excitech Structural Solutions business unit which is focused on UK Structural Engineering. Nigel Rees has joined Excitech to head up this division and expand its presence in the Structural Engineering market. Nigel brings with him 9 years of technical experience of Autodesk Robot Structural Analysis (RSA) software (formerly known as Robot Millennium).
Commenting on the launch of the new division, Managing Director Adrian Atkinson said; “there has been a problem within the industry in providing even the most basic levels of support and training for the new Autodesk RSA software."
Atkinson continues by explaining that "This means that Excitech is in the unique position of being able to partner with its customers and help them realise the maximum value from their investment in the latest structural design and analysis solutions."
Read More here
.
Posted by cadalot at 12:15 No comments:

After many years of faithful service what was my high spec home laptop has died and needs to be replaced. Wanting to run Revit Structure at home I thought I would look at what the suggested minimum and recommended specifications for 32-bit machine to run Autodesk Revit Structure is:-

OK so it seems they are suggesting a min spec to load it and a recommended spec to run it!

Excitech have a document on their web site that recommends CAD Workstation Specifications at http://www.excitech.co.uk/Autodesk_2010/revit_structure_2010/documents/recommended_workstation_specs_2010.pdf

1) What specifications of Revit workstation are you currently using?

2) Have you found that RST 2010 is running slower than 2009 and is this making consider upgrading the spec of your Revit workstations?

Labels: Article, Links
Newer Posts Older Posts Home
Subscribe to: Posts (Atom)
Everything posted on this blog is my personal opinion and does not necessarily represent the views of any other person or party.