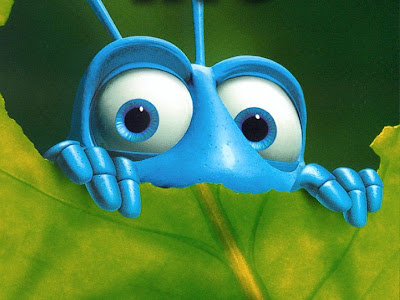 Computers and Bugs have always gone together, I have written a number of computer programs in various languages and one of the things I love is trying to solve code problems and sort out Bugs. My final year project for my degree in civil engineering was a suite of surveying programs called SUE (Surveying Utilities Ensemble) written in Turbo Basic ....yep that’s pre windows visual basic.
I’ve always found it very satisfying to get these little buggers resolved (see what I did there Mum!)
These days I don’t need to write complicated spreadsheets, databases of code, accounts packages but I still like to find bugs and assist in the eradication, that’s why I like to Beta test programs.
I also think that software companies should be very open about bugs in their software and getting as much help as they can to help resolve them.
My current little bugger is that in AutoCAD and Revit Structure 2012 when printing to the KIP 3000 if you press the properties button to the right of the printer name you get an Unhandled Exception Error and the program crashes and bombs out. 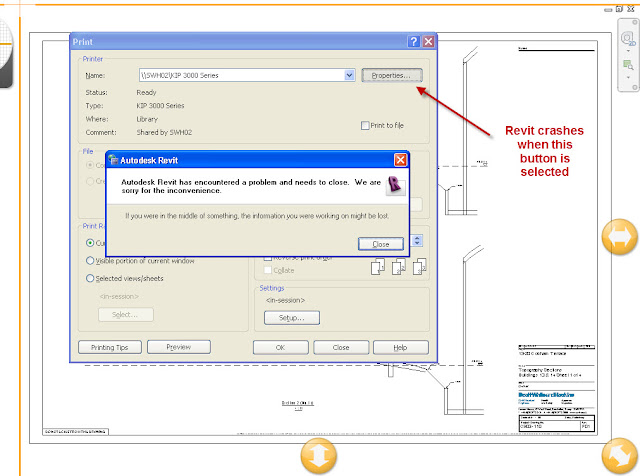 Exception handling allows developers to detect errors easily without writing special code to test return values. Even better, it lets them keep exception-handling code cleanly separated from the exception-generating code. It also lets them use the same exception-handling code to deal with a range of possible exceptions. So, it is always a good idea to handle exceptions rather than leave them unhandled.
So when Revit Structure 2012 crashes in a spectacular way it invokes a reporting system that allows you to send information to Autodesk so that they can investigate.
Now if you complete you email address and they have seen this before they have a system that sends you a suggestion on how to fix the problem. If it’s a new problem or one they have not solved yet then you get one of these back:-

Which is basically “Thanks, our products aren’t crap, and thanks for letting us know you have found a new bug that we missed during beta because we can’t test every bit of equipment and set up on the planet. And when we actually figure out what’s happened and have found a fix or possible fix we will let you know."
Now you either leave it there, or you officially submit a request for help via support.
Then you get a nice email saying
"Dear Alan James Wooldridge,

Thank you for contacting Autodesk Support. Here is the recommended resolution to your case:

As the crash happens after pressing the properties button, it seems to indicate an issue with the plotter driver. The dialog box accessed when pressing this button belongs to the driver interface.

Please download and install the latest driver and firmware for your precise device, from your printer's manufacturer website.

Name Supplied
Autodesk Support Team"
Now you have already told them when you submit the help request that the driver is the latest driver and that you have done the same in Revit and AutoCAD 2011 and they don’t crash, but they don’t seem to have taken that on board.
This is what is called the” Indian Support Centre Syndrome”
The "don’t we look good" if we respond to you really quick with a reply that might work and if that does not then someone who actually knowns or has half a clue has given us a tick list to work you down, until we find a solution or you get fed up keep coming back to the call centre.
The blame the operating system or someone/thing else is another good wiz As in “As the crash happens after pressing the properties button, it seems to indicate an issue with the plotter driver. The dialog box accessed when pressing this button belongs to the driver interface.
However the fact is that Revit and AutoCAD 2012 should not crash if you press the properties button when printing, and that release 2011 works fine escapes them. Also If you did not need to do this then the button would not be there in the first place!.

A quick round robin email to LRUG London Revit User Group members has resulted in establishing that at least one other member is also having printing problems with Revit Architecture 2012
"All our HP printers don’t batch plot correctly from RAC2012. You get text boxes around all text. If you print singular sheets all is well."
I asked if they had made a formal support request they did and the Autodesk solution to that one is
“Yeah I did a support request but they pushed it back to us saying that we need to rollback our HP drivers from what is the latest version. The problem is we can’t do that as it would have a knock-on effect to other internal softwares that need the upgrade of the driver.(ie office2010, etc..)”
Autodesk must have picked up on the fact that they already had the latest version, thus it's the blame the printer driver but get them to try an older version. Same trick different direction ;0)

That’s when you have to find a work around
“So for now from revit 2012 we batch plot to our Xerox machines for A4/A3 size and then the OCE machines for the larger scales.”
With regards to our problem, yes short term I can do everything outside Revit using Control Panel, but if I forget and press that bloody properties button it’s !
The reason I know that we have the latest driver is that we have just had to pay to get it because it supports plotting adobe pdf that the last driver didn't

I have offered to try anything and send any files Autodesk might need but this is their problem, not a driver problem, an operating system problem or a network problem.

There is something different between 2011 and 2012 and it is supposed to be improvements not more bugs to contend with. Now this is why a lot of people still wait for Service Pack 1, and for idiots like me that want to get on and roll out new (and better?) software to find these things and get Autodesk to resolve them.
I will keep you all posted with developments as they happen, If you are also experiencing problems or have a KIP 3000 and you can press the properties button without Revit crash and burning please let me know.
CLICK HERE TO READ UPDATE.
Posted by cadalot at 06:00

Really sounds like a printer driver issue. Have you managed to print to any printer? I have never been a big fan of kip printers, they have never really like rev it and kips tech support is shocking. I won't even begin to tell you about the fuss we are having in our office at the moment with printers.

I have no doubt it is a driver and 2012 conflict, I've checked from two different machines. But 2011 is OK so it's something in 2012 that is causing the problem. All other printers work fine.

No problem working with our 5 office printers (HP, Canon, Ricoh)

we only print to PDF and then print from any printer using that PDF.

This is precisely why I had to get out of the reseller game. Could not run blocker for them any longer. New Autodesk software and print drivers = Yuck ! It's the same every April. Now a days I recommend printing to PDF then send that file to the printer but then you need to by Adobe for each PC. Added expense. I've said it before and I'll say it again. It's the egg timer approach. Whether it's ready or not, when the bell goes off on April 15, the software goes out the door. I believe a 2 year release cycle would be much better and easier to keep everyone on the same release (as you cannot open older files). The share holders are the only ones who appreciate the 1 year release cycle.

I have the same issue with Revit 2012. We are having odd printing issues with several of our projects, and when I press the Properties button it is crash city over here as well. It is good to know that it is a shared issue.

I am having the same issue. We are having printing issues with several of our projects and when I click the properties button we crash. It is nice to know it is a shared issue.