Harlan Brumm over at Revit Clinic has written that
“It is important to know that some content may still be downloaded from the internet (depends on if you are downloading Revit or installing from media), so it is a good idea to install Revit with a active internet connection. With 2012, you will not see the download occuring though (no content loader), it is transparent and happens behind the scenes. Your installation may take more time depending on how much content needs to be downloaded as part of the installation.”

I installed a copy at home to harvest the content library to install on the server at work because we have network copies. 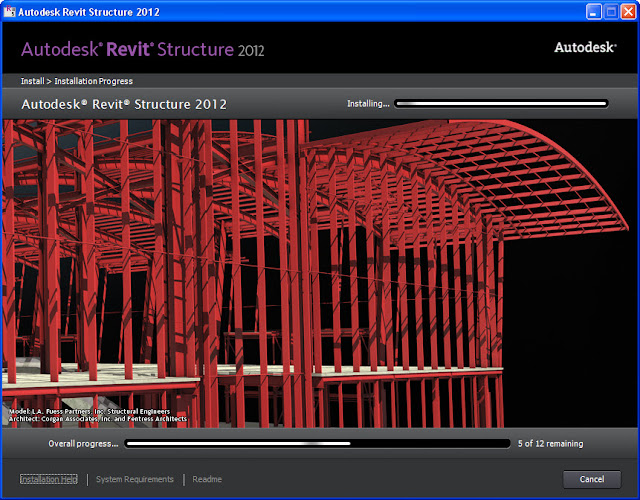 The Installing indicator at the top stopped and I was stuck at "5 of 12 remaining" for such a long time that I did begin to think that the install had crashed, so be warned think Take That and "have a little patience"

At work we obtained the new network licence from excitech via email in about 12 minutes which was good going chaps, thank you much better than our last reseller.

We are installing two copies so that we can migrate our families from 2011 to 2012 format and rebuild our template before rolling out 2012 to all at our three offices.

So at work I ran the downloaded exe which unpacks the Revit Structure 2012 onto the hard disk and then starts the install routine which took about 8 minutes.

I turned off all the content because I don’t need it on the hard disk, as we all point to the server for our library. The whole install took an hour, and again a screen like the one above stuck at 5 of 8 (I assumed a lower number because no families and I had Design Review 2012 already installed on the PC at work)

When the message to reboot finally appeared and I looked at the hard disk it had installed the library on the hard disk although I had turned it off. So be warned, it appears that it still goes and harvest in the background.

In addition Harlan Brumm over at Revit Clinic has also posted about the relocation of certain files, he missed that the library has a new home.

Formally in 2011 the Metric Library was found under:- C:\Documents and Settings\All Users\Application Data\ Autodesk\ RST 2011\Metric Library
In 2012 for some reason It is now to be found under:- C:\ProgramData\Autodesk\RST 2012\Libraries\UK
There is no explanation as to why they have done this?
It would appear that during the change in name from Metric to they have also dropped all of the European Specific Folders from Profiles, Columns and Framing etc. Which is kind of weird, since the last of the Eurocodes are just getting their national annexes published after many years, and just starting to be used?
Again no explanation as to why this has been done?
For some reason they have deleted the Corus Advance folder and its contents that was found under G10 – Structural Steel Framing \ Steel Sections
Autodesk have traditionally have been very poor at documenting what exactly should be or is in and out of the library.
Each folder should have a readme.txt file that provides information on:-
The amount of files there should be in the folder
What files have been removed since last year and why they were removed.
What files have been added since last year and why they were added
Thus, confirming that the remaining files have had no modifications.
This will enable BIM Managers to Manage.
Where manufactures specific content is supplied it would be useful to have a hyperlink to their web site in the text file or as a parameter within the family.
.

Click HERE to download the 7 page review of the Revit Structural Suite 2012 Out of the Box UK (formally Metric) Library Reference Guide with Files.

The seven page document covers what's new and what's missing since last year, but I can't give you any information about what might have been corrected or modified since last year, only Autodesk could and should do this.
.
Revit Clinic have just posted this:-

If you have installed the UK Metric content for any of your 2012 Revit products, you may have noticed that some of the templates are not present. The missing files are standard metric files and can be obtained by downloading the US Metric content. To do so:
So now they expect us to install all the US Metric Content to get what they have missed, this is one balls up after another. This is a prime example of why there should be a text readme in each folder as I have been suggesting for years.
.
Posted by cadalot at 06:00

Many thanks for this example of how to revise Revit.
I is typical of AutoDesk - they should employ architects to make their software more intuitive.
I have a copy of 2012 and it is horrendous trying to set it up rpoperly. No wonder few British Architects use it.