.
Revit ONE Box details and Video
Autodesk Revit 2013 allows you to customize discipline functionalities based on your needs, another benefit is instead of having different content library for each Revit verticals, there will be one single content library to help organize your company library. With all the tools accessible within a single application, it improves the multi-discipline workflow for the industry.


Shruti Harve, Senior Application Specialist at Ideate, Inc. goes over enhancements made to reinforcement modeling in Revit Structure 2013, including:


(What an annoying voice)


Autodesk Revit 2013 extends the capability to support construction modeling by allowing further customization with parts. Parts can now be merged, excluded and restored. Two or more parts can be merged into a single part. Exclusions will remove parts from the project similar to the way elements can be excluded from a group, and finally excluded parts can be restored at any time.


New Component-based stairs in Autodesk Revit Architecture 2013 provide capabilities to assemble a stair using individual run, landing, and support components. Each run and landing component can be modified by using direct manipulation controls. During the creation process, you can preview the stair in 3D as you sketch the various components. Component-based stairs allow overlapping stairs to be created, as well as more stair layouts including spiral stair cases and winder stairs. Additionally, you can create multiple runs and have Autodesk Revit automatically create landings to connect the runs

Normal Service will be restored

.
I'm off to site so on the basis that one can download the trial version I thought I would harvest the upgrades before I leave the building.......the message on the subscription centre says:-

Attn Subscription Customers: Currently some 2013 products may not be available for immediate download. We are currently working on the issue and will resolve it ASAP. PLease check back for further updates 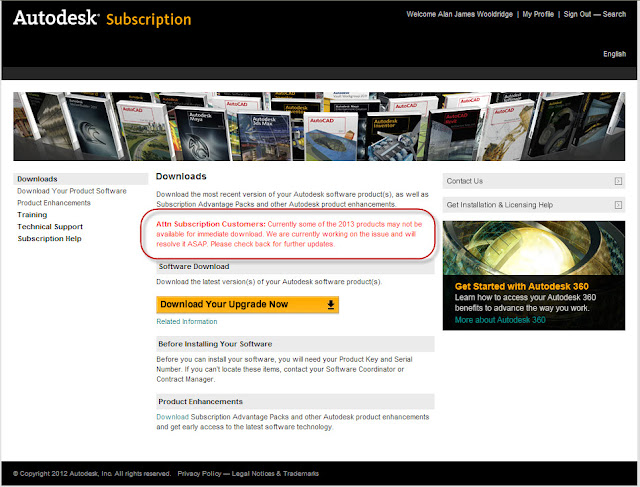 Hi Blog Readers
No I've not dropped off the universe, just been very busy with family issues as my wife Jennifer was taken into hospital and for a short period was in intensive care. Combine that with work and organising and administration of the LRUG http://www.lrug.co.uk/ March meeting, then editing videos and creating material from the presentation to upload to the LRUG members’ area of the web site there Isn’t very much time for other interests or blogging.
Thankfully we now have Jen home with us again, complete with cylinders of oxygen etc. but she is still with us and hopefully on the road to recovery.
What can I say about RST 2013……
OK as previous years I have been beta testing, but no Bloggers event this year, shame I missed killing the penguins. In reality I would not have had time for it with everything that has been going on.
The same stupid prat that let the cat out of the bag early last year (who some see as a Revit Evangelist) has done the same this year. I saw a linked-in notification of his posting and was not surprised who it was when I went there to read it.
David Light a fellow founder of LRUG has done his usual excellent review, (Click Here to read) and as the NDA is over I can now Blog legitimately.
From my point of view, I’m underwhelmed with the lack of development, as I have been the last couple of years. The 2010 and 2011 version saw major advances with the product and real additions halfway during the Autodesk product year at Subscription Advantage Release.
I understand that for most of the world there has been a recession, however looking at press releases about Autodesk profits recently, they need not only to squeeze every ounce of monies out of large corporate companies but to actually use that money in developing the products to give us real tangible benefits.
We are still waiting for many items that have been on the users “Need List” not “Want List” (and there is a distinct difference) for many years now. One prime example that comes up every year is Subscript and Superscript in the text editor. It’s basic and fundamental, and still missing within the Revit 2013 text editor.
OK off soapbox and to some stuff I can share.
Many moons ago, when I was younger, so much younger than today, (sorry I had a Beatles moment) in January 2008 I produced my first Revit Libraries Reference Guide and Autodesk used it to make modification to all the typographical errors and misspellings in the 2010 release the following year.
And it’s since then I have produced a review annually so Click Here for the Revit Structure version for 2013
Best thing I can say is download and read it, some stuff has been moved around and renamed so much I’ve included diagrams like the one below just to sort it out in my own mind. 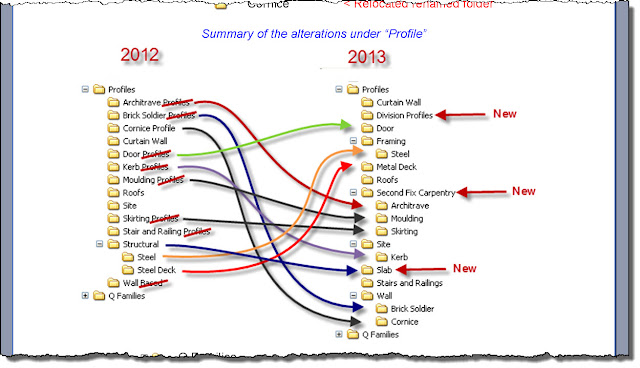 .
Really Cool video found by Erik over at Who's afraid of the Big Bad BIM? - Click Here for the original posting.

Erik says that these flying robots have been making the rounds for a while, well I had missed them until his posting , I think that apart from those in BIM liking cutting edge stuff, when you see how they can map a building now that's impressive - why do I feel like we aren't taking notice of Terminator and I was looking for a Skynet logo in the background somewhere.

As Erik says "Very worthy of your coffee break time."
Posted by cadalot at 18:30 1 comment:

Labels: My_Point_of_View
Newer Posts Older Posts Home
Subscribe to: Posts (Atom)
Everything posted on this blog is my personal opinion and does not necessarily represent the views of any other person or party.