There is a posting on http://www.revitzone.com/ confirming that development of the Revit Zone website has now finished. But fret not, lots of new Revit goodness is on it's way to their new site at revit.biz

Ian is currently in the process of transferring all the articles and tutorials to the new site. Fear Not: Revit Zone will remain up and running until we have completed the transfer of information and all back links to the site have been updated.

revit.biz has a totally new set of forums which is developing nicely. So please, continue to utilise and enjoy the information that has amassed here over the last two and a half years (YES, it has been that long!). But if you're looking for new info and daily revit links, please bookmark the new site: revit.biz
Posted by cadalot at 06:00 No comments:

Awesome behind the scenes of Avatar......

Awesome behind the scenes …….. Virtual Camera to look around the virtural environment and look at the actor in the babygrow with the pips on it as their character!

---
Excitech will be demonstrating how complex designs can be iteratively developed and analysed, to produce powerful parametric design models that can be easily intergrated with other solutions and utilised during the fabrication process.
==
The following subjects areas will be covered during the session
=
WindTurbines------------Tunnels ----- 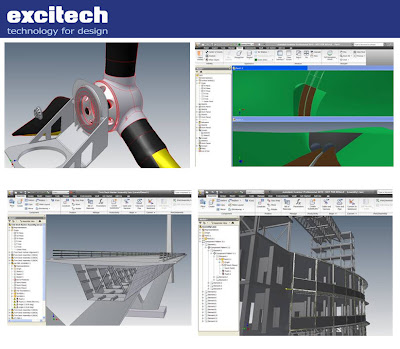 ----------Bridges -----------Complex Steel Structures
Many of the UK's leading engineering design & construction firms have already registered for this event, so if you think these are relevant to the aims of your organisation, you can join them by registering at http://www.excitech.co.uk/mb66 or alternativly contact Rhys Lewis Senior Account Manager on 0845 370 1549 or 0784 157 0546 email rhys.lewis@excitech.co.uk
---
Posted by cadalot at 06:00 No comments:

Revit Structural Suite 2010 Out of the Box Metric Library Reference Guide as installed in the UK. I originally created this document back in 2007 for version 2008 and catalogued all the typos and spelling errors in the Metric Library and sent it to Autodesk so that they could make the corrections for version 2009.

I’ve also used it in the past to catalogue and ask questions about UK Specific Content when released. 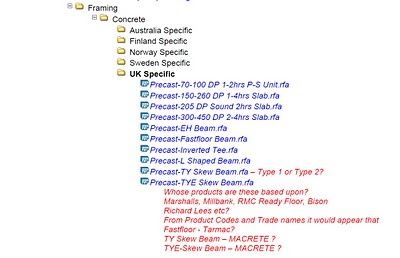 ---
---
---
---
Autodesk have traditionally been very poor at documenting what exactly should be in the (metric) library. I’m hoping they are going to improve in the future (OK I’m an eternal optimist! ;0)
Recently in the service packs you get a ~Newfilelist~.ini that gives you some information about what has been added and a backup of what has been removed. However I firmly believe that each folder should have a readme,txt file that gives:-
----
----
----
Name of the folder
# Files Deleted ~ (with a full listing with some explanation of why they have been removed)# New files added ~ (complete listing)# Files Modified ~ ( with a full listing with some explination as to what has been modified and why?)# Files updated ~ (Those that are exactly as in the previous release but have just been upgraded to the current format)
Where Manufactures specific content is supplied it would be useful to have the manufacturers name and or product or trade name as part of the family file name

Hyperlinks to Manufacturers web sites would also be extremely useful. This information should be embedded with the family.
-
Posted by cadalot at 06:00 No comments:

-
I found this document on the blog Fear and Loathing In a CAD vs. BIM World

Whether transferring to others or even working from home (see the BONUS!!! section) Central files need extra attention paid when dealing with them:

File Transfer Whitepaper
Posted by cadalot at 21:59 No comments: 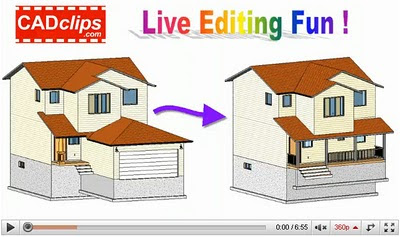 .
More excellent video tutorials from the screen of Daryl Gregoire of Revit Rocks! and CADclips.

13 CADclip tutorials that demonstrate live editing to convert the House with the Garage to the House with the Front Porch as illustrated left.
.
First we do all the modeling and then we go through and cleanup all the Views and Sheets.

Don’t forget to use the 10% Discount "Cadalot" coupon code if you buy anything from the CADclips web site, because you get a discount, and I get some commission ;0) .
Posted by cadalot at 06:48 No comments:

Pop over to Technology4design blog for a nice little Tip and Trick on how to find the unconnected beams ......... Nice one Lawrence as you say "Short and Sweet!" and so simples!
Posted by cadalot at 06:00 No comments:

Click here to visit the CADclips web site
Click here to see the CADclips on Youtube
Click Here to see the FREE CADClips on CADClips.com
Click Here to visit Revit Rocks!
Click Here to see CADClips Purchase Options (link Updated).
---Below is series of FREE CADclip 'Lab Exercises' on how to model and document the drawings for a double car garage. This is a great training aid / resource for anyone who is teaching REVIT or learning to use REVIT (Architecture or Structure).
Daryl Gregoire has these as a single playlist on Revit Rocks! The playlist starts at Lesson 1 and moves on. Listed below are links to the tutorials posted on YouTube.

Remember, these are 'Lab Exercises' and not a Tutorial. They are best utilized after getting familiar with REVIT. For more detail tutorials visit CADclips.

The Lab Exercises start with grid lines and levels, then walls, doors, windows, footings and a roof. Then a sloping slab and notched foundation wall at the overhead door. Then we put the plans, elevations, section on a sheet and annotate them for documentation. The we will create Schedules and Material Takeoffs that include Totals and Costs.

We also constrain and align the walls, grids, roof and slab to establish a nice neat parametric project.

Move a grid line and the entire project updates right down to the sheets, schedules and costs.

I have no idea who openRevit is, but when I find out I will update this posting

Export Revit to EnergyPlus via Ecotect - Part I
Introduction

Export Revit to EnergyPlus via Ecotect - Part VII
Construction Verification and Review in IDF Editor
.
Posted by cadalot at 10:03 No comments: 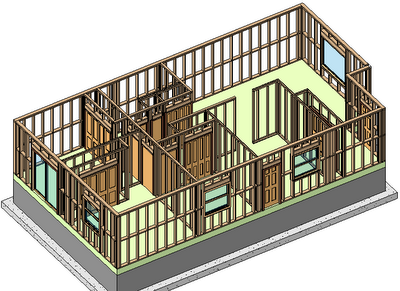 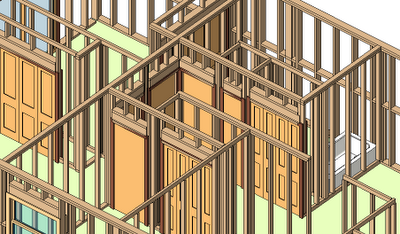 Derek Ddufon is upgrading his Easy Revit 2009 "Walk through of an entire project step by step" Series of Video Tutorials to 2010 there were 35 videos in the 2009 series so I'm sure there are more to come......


This list will be updated as Derek uploads more videos....
Posted by cadalot at 06:30 No comments: 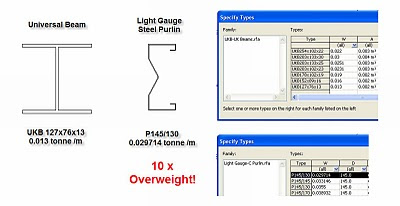 It appears that the Light Gauge Steel sections are 10 x Overweight.
---
This has been reported to Autodesk and the Support Team are currently investigating ......
---
I will let you know what their answer is, and when we can expect a fix when they reply.
-----
-----
------
-----
---
Autodesk Support Update .... Error in the txt file confirmed, currently no indication when a fix will be released, instruction on how to edit the txt file to correct the error provided!
--

Labels: * Families, Bug_Reports
Newer Posts Older Posts Home
Subscribe to: Posts (Atom)
Everything posted on this blog is my personal opinion and does not necessarily represent the views of any other person or party.