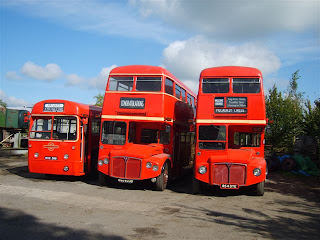 It may be pure coincidence, however since my posting on the 31st January about the lack of effort and posting over at BIM and Beam since moved on from Autodesk from the five nominated Authors (The Famous Five), postings on BIM & Beam are now like London Buses. Nothing for ages then three all come along at once (usually one after the other and not side by side as the picture above).
Squeezed out into the blogger-sphere just after my posting and before midnight on the same day, actually making it two posts in January is  Autodesk ForceEffect Version 2.0 Now Available!
This posting is about a free app available for Apple iPad and iPhone from the iTunes App Store that allows engineers including structural engineers to model and simulate concepts. Real time solving capabilities provide immediate feedback on the performance of a design, enabling you to bring engineering to the point of the problem.
No Author credited for this posting which is a real shame because you don’t get to see which of the famous five suddenly burst into life. Nice posting, actually had something to do with structural engineering.
Then as if a Bear being poked with a stick.......

Two postings ON THE SAME DAY – Bly me!
The first posting is about  Operating Systems support change for Autodesk products Reporting that there has been an important change to the way Autodesk are support Operating Systems for Autodesk products.  This change directly impacts the Revit family of solutions.  Please see the following link for the change and important details Microsoft Windows Vista Support FAQ, it says
Again NO AUTHOR CREDIT, So no answer as to which of the Famous Five Authors is alive, breathing and blogging?
Then as if to answer the question Pawel Piechnik posts  New structural content for Revit Structure is available straight after on the same day.
It appears Autodesk (Pawel) thinks that they have just uploaded some new country specific, structural .rfa content and templates in the Subscription Centre for you to download.
The delivery includes content for , and Yipppppeeee for them
However it looks like Pawel may have jumped the gun with his posting because three readers have reported that they can not find the material on the Subscription Centre and are requesting a hyperlink!
OK, ok, I know we asked for some action and more postings on your blog, but you could have scheduled the posting for a couple of days in the future, to make it look like you are continually active on our behalf, or at least ensured the material was actually there before you told the world about it......

I know we the User and never happy :0(   The Headmaster now says  "6/10 Better". Now a plug for things UK based ;0)
Autodesk have asked for feedback about what’s missing out of the box for the UK users, so unless you actually helped Paul Oakley gather feedback for Autodesk – don’t complain if when a similar package arrives for the UK it does not have in it what you would like.

I'm more inclined to believe that this is bear poking in action, rather than coincidence.

I’m far to modest to accept any credit for bringing the nearly famous five out of their slumber ;0) but you could be right