.
Last night my two daughters and I went to see McFly at the Hammersmith Apollo, Those guys get better with each year and they have been around nine so far. Emma has been a fan since day one, I dropped them off at Fairfield Halls 8 years ago and picked them up, then I had to go with them to Wembley the following year. "Dad you have to know the words of the songs if your coming with us" and so a now 54 year old McFly fan was born, and we have seen them each year since. 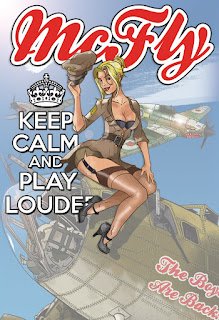 I did keep calm and they did play lounder, thank god for ear plugs, no joke after seeing them last year at a small venue I thought they had gone out of tune at the end of the concert and my ears rang for a good 24 hours after, this year I took steps to not inflict any more hearing loss.


The track above is very Mike and The Mechanics like

My daughters have been so good and supportive since my wife was taken into hospital and since we have had her home and on oxygen, I would love to arrange for them to actually meet McFly as a reward.

Who knows it is said they there are only six degrees of separation between us and everyone on the planet - if I post it up here it may happen!
.
Posted by cadalot at 16:55